Brand:
Thums Up - The Coca-Cola Company

Coca-Cola, the corporation nourishing the global community with the world’s largest selling soft drink concentrates since 1886, returned to India in 1993 after a 16 year hiatus, giving a new thumbs up to the Indian soft drink market. In the same year, the Company took over ownership of the nation’s top soft-drink brand and bottling network. It’s no wonder their brands have assumed an iconic status in the minds of the world’s consumers

Thums Up – Taste The Thunder: Strong Cola Taste, Macho Personality
Thums Up is the leading sparkling soft drink and most trusted brand in India. Thums Up is known for its strong, fizzy taste and its confident, mature and uniquely masculine attitude. This brand clearly seeks to separate the men from the boys.

Agency:
Thums Up - The Coca-Cola Company

Concept:
This March, Thums Up introduced the “Thunder Wheels” offer. Users would have to SMS the unique code printed under the Thums Up crown to 58558 and win a Apache Motorbike every hour. The promo was communicated through TVC, Print, Outdoor, POS and Radio.

Mobile2win conceptualized and launched an SMS campaign for Thums Up. All a consumer needed to do is purchase a bottle of Thumbs up and SMS 'APACHE' followed by the 9 digit unique code that was printed under the crown to 58558 from their mobile phones. Users could send as many different codes to increase their chances of winning. Lucky winners could stand a chance to win an Apache RTR 160 motorcycle every hour!

Promotion:
The Thunder Wheels campaign was promoted through Television, Radio, and Outdoor. A TV & Radio commercial was created to promote the campaign and was aired on all major channels. Banners, advertisements and links were posted on websites. The initiative was applicable to 200ml, 300ml returnable glass bottles (RGB) and also on 500 ml, 600 ml 1.25, 1.5, 2 & 2.25 liters PET bottles.

Thums Up also used Interactive Voice Response System (IVRS) to promote the contest and via www.thumsupthunderwheels.com for web users.

Below is a screenshot of the Thunder Wheels Contest: 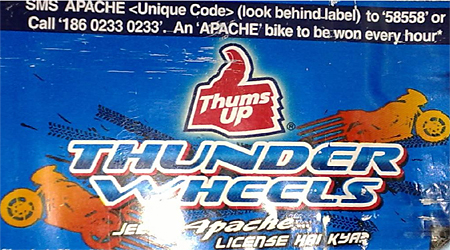