Konami Digital Entertainment GmbH’s Metal Gear Solid 4 Innovative Mobile Marketing Campaign )MindMatics)
Brand: “Metal Gear Solid 4: Guns of the Patriots” for Playstation 3
Category: Mobile Games
Vendors: Konami Digital Entertainment GmbH
Agency: MindMatics AG
Region: Germany, France, Spain and Great Britain
Timeline: June until end of August 2008
Results: by now a high number of participants requested further information about the new games edition
Summary:
For the Konami release of the eagerly awaited “Metal Gear Solid 4: Guns of the Patriots” for PLAYSTATION®3, MindMatics has developed an interactive web-to-mobile marketing campaign called “Help Snake”. The emotional and gripping high involvement idea was specially tailored to the gaming community. The key technical element is a completely new mobile phone controlled form of interaction.
The long anticipated final instalment of the Metal Gear Solid saga, Metal Gear Solid 4: Guns of the Patriot, was released worldwide on June 12, 2008. With one million copies sold in the first day in Europe, it is already one of the most successful video game releases of the year. The mobile campaigns which have been launched in Germany, France, Spain and Great Britain combine the spirit and attributes of the game – sneaking, hiding, cinematic dramatics – and bring the product and target group closer together.
The core idea of the “Help Snake” campaign is that the player is given the task of guiding Solid Snake in his transition through an enemy occupied system of basements.  On the campaign’s website )www.konami-mgs4.com), the user follows Snake’s adventure in an initially non-interactive film. This ends with the request for the participant to enter his mobile phone number, because Snake is in clear need of help. The participant’s mobile phone then rings and it is Snake on the other end, asking the user for directions. The participant can only help Snake by pressing the activated buttons on his mobile phone keypad to give Snake the necessary directions and thereby steering him clear of the enemies circulating in the area. Once he has successfully done this, the user has the opportunity to register for a competition.
Each participant also receives a link to the mobile Metal Gear Solid 4 WAP portal, where he can find further information about the game as well as wallpapers and exclusive ringtones, which the users can convert for their own phone with the Metal Gear Solid communications centre.
“This was an extremely successful solution for the launch of the game. The online communication is supported by an intelligent Mobile Marketing extension,” praised
Martin Schneider, European Marketing & PR Director of Konami Digital Entertainment GmbH. “The involvement of the user in ‘Help Snake’ leads to a larger involvement and together with the combination of web and mobile, creates an outstanding campaign which is truly unique.” 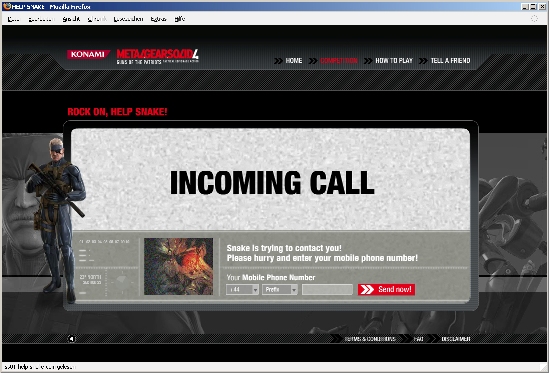