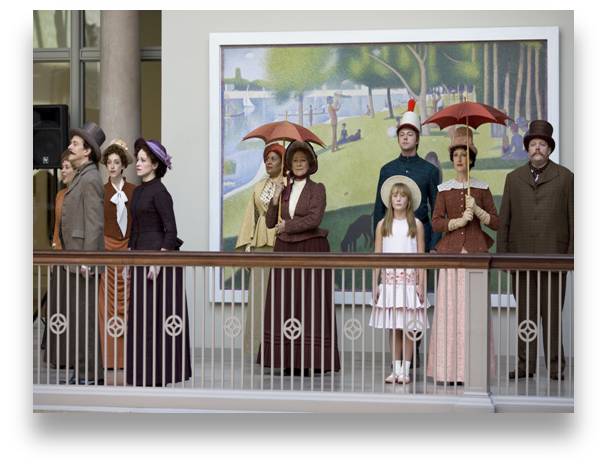 Chicago Shakespeare Theater and Leo Burnett USA kicked off fall production of “Sunday in the Park with George” with a surprise live performance by actors from the musical at the Art Institute of Chicago. What was surprising about the performance? The actors performed in front of a life-sized replica of the famous masterpiece by George Seurat, but this replica was missing key figures from the original work of art. After the performance the audience was encouraged to join a mobile messaging campaign to discover the secret of the missing characters.

This event was captured on video and integrated into a marketing campaign using mobile, social media, contest for a free trip to Paris, PR campaign, auctioning of the faux painting for charity, and more. 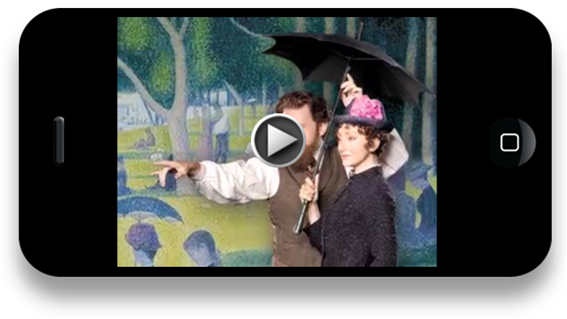 Using Iris Mobile’s image-based mobile messaging technology, Rich Media Messaging, opted-in audience members received a video explaining how the missing characters in the painting have come to life in Chicago Shakespeare Theater’s new musical and encouraged them to buy tickets to see the performance.
Results show that 21.7% of the customers that participated in the campaign had feature phones while 78.3% had smart phones. Over 14% of opted-in users shared the rich content they received on their Facebook. Additionally, over 17% of opted-in users agreed to receive future updates from Chicago Shakespeare Theater over messaging.

This creative use of technology resulted in a unique interactive mystery for the audience and helped Chicago Shakespeare Theater deliver tremendous results using mobile messaging.The use of Rich Media Messaging enabled users to receive exclusive rich video content, which could further be shared on Twitter and Facebook, further amplifying the success of this campaign. The RMM platform automatically detected and optimized messaging content individually for all different mobile devices so opted-in individuals were able to view content clearly on their screens, resulting in very high engagement, and all at standard messaging rates.
According to Sean Brennan, Marketing Assistant at Chicago Shakespeare Theater, “Not only did Iris Mobile’s marketing solution help generate positive buzz for our production, but it also provided an innovative way for us to engage with theater enthusiasts in Chicago.
This multi-faceted campaign produced excitement for the upcoming production by generating over 8 million impressions in just 24 hours. The musical broke all-time record by having the highest number of first-time guests in the history of the theater. Due to popular demand for tickets, the musical was extended for an extra week.
Leo Burnett received high recognition for this marketing campaign at the REGGIE Awards walking away with the Super REGGIE and four golf REGGIE awards in Creatvitity and Innovation, Experiential Marketing, Local/Regional Campaigns, and Small Budget categories.