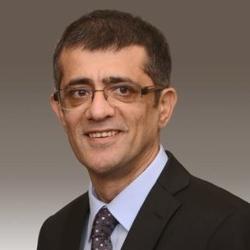 Sunil Lulla has recently been appointed as the Chief Executive Officer of The Broadcast Audience Research Council, India, BARC.

Until recently Sunil was the Group Chief Executive Officer of Balaji Telefilms Ltd, where he was in charge of the businesses of Television Content, Feature Film Content and its S-Vod OTT service ALT Balaji.

Prior to which, Sunil was the Chairman and Managing Director, of GREY Group India, which he helped successfully around, with culture change, new client acquisitions, M&A and new skill acquisitions . Preceding GREY, Sunil spent 10 years, as the Managing Director and Chief Executive Officer of the Times Television Network, which he built out with great success, creating 5 leading TV channels, TIMES NOW , ET NOW, MOVIES NOW, ROMEDY NOW, and zoOm.

His early years were spent in Sales and thereafter with J Walter Thompson, a leading global advertising agency, in senior positions in India, China & Taiwan. Sunil was member of the team, which helped turned around Sa Re Ga Ma (HMV). He kick-started and built MTV to a number 1 position in India. At SONY with successful programming and marketing, he re-built the channel to a strong #2 GEC. He co-started indya.com, one of India’s early and leading Internet portals, which was subsequently acquired by News Corp/ STAR, prior to which he was the Head of Marketing for Diageo in India.

Sunil has been a Board member of the businesses he has served Times Group (Television, Internet and Movie businesses), GREY (Advertising and Digital Businesses) . He has been a Board member of influential industry associations (Indian Broadcasting Foundation, Advertising Standards Council of India, News Broadcasters Association, Broadcast Audience Research Group) wherein he has helped drive policy and agenda setting themes for the advertising, media ,digital, news and entertainment industry. He is also an independent Board Member of a listed company and a Fellow of the Institute of Directors. He has deep insights into Indian consumers and their content consumption needs.

He is an active sports-oriented person fond of running, sailing and swimming. While at rest, its music , movies and books, with a good hand at mixology.