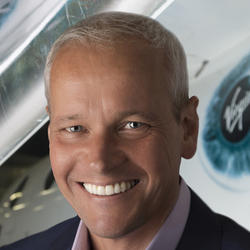 Stephen was invited by Richard to join Virgin Galactic as the company's first full time employee in 2004 to put in place the commercial foundations of the business and to create a new market for private space travel. He now leads the company’s commercial activities, covering brand management, sales, marketing, customer care, communications, education and outreach, as well as partnerships for the human spaceflight business. This work has now attracted around 700 Future Astronauts from more than 50 countries along with $80m in deposits. He has also been responsible for work-streams investigating and now building the non-tourism applications for the new space vehicles, particularly science research and small satellite launch.

Stephen speaks regularly around the world about the importance of opening access to space for the benefit of life on Earth. Stephen joined Virgin Galactic following a career in investment management in the City of London, most latterly as a Director at Fund Managers, Gartmore.

He lives in London and Sussex in the UK, but spends a lot of time in the Mojave and New Mexico deserts.