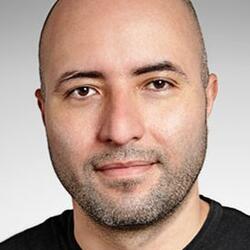 Rodrigo Sobral is R/GA London’s Integrated VP Executive Creative Director. He is responsible for the agency’s creative output and provides thought and innovation leadership for its clients.

He joined R/GA in January 2013, with a clear focus on developing Campaign and Storytelling capabilities, as well as a bold creative vision to realise the agency’s ambition of becoming a Broadcast leader.

As a result of his successful journey he has seen R/GA London double in size, win accounts like Nike and Google, and be named Campaign’s Digital Agency of the Year 2014. This momentum has rolled into 2015, with the R/GA Network being named Ad Age’s Agency of the Year and the 1st runner up for Creativity Innovators – a clear confirmation of the fully integrated approach Rodrigo believes in.

He has been the driving force behind the agency’s award winning Beats by Dre work, leading the creative on the Hear What You Want and The Game Before The Game campaigns - helping the brand to become the #1 headphone in North America and Europe in advance of its acquisition by Apple for 3 billion dollars.

Prior to R/GA Rod was the Co-Founder and Executive Creative Director of the Mill Digital and led the agency to win many international awards, including 4 Grand Prix and a nomination for Digital Agency of The Year in 2012 by the BIMA. Before the Mill, he was a Creative Director at AKQA where he developed the prestigious NikeFootball platform, Nike Supersonic and Nike Write The Future digital campaign.

He began his career in Sao Paulo as a designer, developer and skateboarder before becoming the founding partner of Loo/SP, a pioneer Digital Creative Production Company in Brazil. For him, great work has always been an act of collaboration – putting thoughts forwards and thrashing them out alongside everyone else. The best ideas will survive.