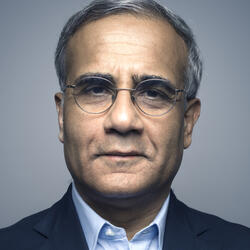 Rishad Tobaccowala is the Chief Growth Officer of the Publicis Groupe, the world’s third largest marketing communications firm with 78,000 employees.

Over his 37-year career in marketing, Rishad has served as the Chief Strategist of Publicis Groupe, The Chairman of Digitas and Razorfish and several roles at Starcom and Leo Burnett including setting up the first digital units for both firms called Starcom IP and Giant Step over 20 years ago.

Rishad is finishing a book titled “Restoring the Soul of Business: Staying Human in The Age of Data” which will be published by Harper Collins in January 2020. In addition, Rishad is a prolific speaker keynoting many conferences around the world.

Rishad is also the Chairman of The Tobaccowala Foundation which helps 10,000 people in India gain better healthcare and education.