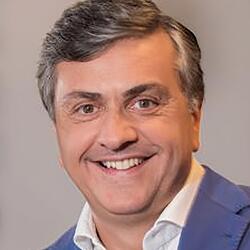 With 25 years of international experience in leadership positions across marketing and business management, Nuno Teles excelsin growing businesses in profitable and sustainable ways with strong strategic orientation, commerciality and thought leadership. Since March 2018, he has been President of the Diageo Beer Company, the U.S. beer business for Diageo North America. In this role, he oversees a brand portfolio that includes the iconic brand Guinness, as well as Diageo’s Ready to Drink (RTD) offerings, such as Smirnoff Ice and Seltzer.

Nuno arrived at Diageo with extensive experience in the beer industry, beginning at Scottish & Newcastle, followed by a move to Heineken in 2004 – working across numerous geographies including Portugal, the Netherlands, Brazil and the U.S. He has a strong understanding of the U.S. market, including its channels, consumers and distributors. Since Nuno joined Diageo, the company opened the first Guinness brewing operation on U.S. soil in more than 60 years – the Guinness Open Gate Brewery in Baltimore, Maryland. The brewery quickly became a must-visit destination, producing more than 150 experimental recipes and hosting more than 700,000 visitors in its first two years of operation.

Highly respected in the industry, having been featured twice in AdAge, including “Marketer You Should Know,” Nuno was also listed among the “Top 50 Most Influential Marketers in the U.S.” by Forbes. He is the recipient of several industry accolades, including three Unilever awards for “Best Advertising,” “Achieving Growth and Profit” and for an “Inspirational Business Proposal,” and was named “Best Marketing Professional of 2012” by LIDE (a group of the top 100 companies in Brazil).