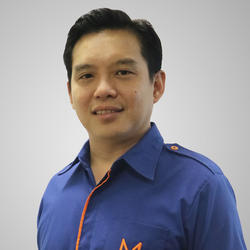 Previously, He was the Chief Commercial Officer (CCO) at PT. Internux (BOLT! Super 4G) and have made several

achievements. In 2014, under his command, BOLT! launched the first 4G Smartphone in Indonesia.

which are The Most Favorite 4G Provider in Seluler Award, and The Most Promising Service Provider

Prior to that, he was a Chief Financial Officer at First Media Tbk. in 2010-2013, and held various senior roles

at Citibank NA for four years.