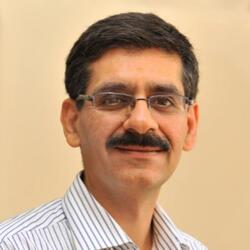 Hemant Malik is currently the Divisional Chief Executive of ITC’s Foods Business and is also a member of     Corporate Management Committee of ITC Limited. ITC is one of India’s foremost multi-business enterprise with interests in consumer products, hotels, paper, agri-business and IT. ITC Foods is the third largest packaged food company in India and also the fastest growing, with strong play in staples, snacks, biscuits, noodles, spices, juices, diary, chocolates etc.

Hemant has built his entire career with ITC, having joined the organization in 1989 after completing his MBA from IIM Calcutta. He has been in various marketing roles in both the traditional as well as the new businesses of ITC before moving into business roles.

Hemant was part of the team that started ITC Foods in 2002 and was the Head of Marketing for six years between 2002 and 2008. He has been responsible for the creation and development of several prominent brands like Aashirvaad, Sunfeast, Kitchens of India, Bingo, Yippee B Natural, Fabelle.