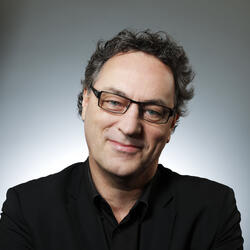 Gerd Leonhard is a well-known Futurist and Author of 5 books, a highly influential Keynote Speaker, Think-Tank Leader & Advisor, and – since late 2011 – the Founder of GreenFuturists.com. Gerd also serves as Visiting Professor at the Fundação Dom Cabral (São Paulo, Brazil). He is well-known as the Co-author of the influential book ‘The Future of Music’ (Berklee Press, 2005), and as the author of ‘The End of Control’ (2007), ‘Music 2.0’ (2008), ‘Friction is Fiction’ (2009, Lulu Publishing), and ‘The Future of Content’ (Kindle-only, 2011). His new book “From Ego to Eco” will be released in May 2013 (note: most of Gerd’s books can be downloaded as free PDFs via GerdCloud.com ie Dropbox).

Gerd’s background is in music and the music business; in 1985 he won Berklee College’s ‘Quincy Jones Award’ and subsequently spend 10 years working as a professional guitar player, composer and producer. He then caught the Internet bug and became a digital media entrepreneur and start-up Internet CEO, based in San Francisco, for 7 years. In 2002, Gerd returned to Europe and started his career as a Futurist, Keynote Speaker and Strategic Advisor. He now travels around the globe and speaks at many major conferences and events, company retreats, seminars and in-house trainings on the Future of Business, Sustainability, Environmental Policy and Climate Change, Media, Content and Entertainment, Technology, Marketing, Advertising & Branding, Telecommunications and many more topics. In 2011, Gerd widened the scope of his work to include some of the most pressing ‘green’ issues such as sustainability and sustainable capitalism, renewable energy, climate change and global warming (see GreenFuturist.com).

Gerd is considered a leading expert on topics such as digitally-native business models, the networked society, a sustainable business ecology, social media, social business and So-Lo-Mo communications, TV & Radio 2.0, mobile content, innovation, leadership and entrepreneurship, consumer trends, UGC and peer production, copyright and IPR issues, next-generation advertising, marketing and branding, and recently the development of ‘green futures‘ scenarios. In 2006, The Wall Street Journal called Gerd ‘one of the leading Media Futurists in the World’. Review his public endorsements here, or via LinkedIn.

Gerd’s keynotes, speeches and presentations are renowned for his hard-hitting and provocative yet inspiring, personal and intense motivational style. With over 1’300 engagements in 47 countries since 2002, Gerd has addressed over 350.000 executives and professionals, and is considered a key influencer. His diverse client list includes Consumers International, Youtube, Nokia, SAP, Motorola, Rhodia, SES Asra, the WWF, The Guardian, Google, Sony Music, Telkom Indonesia, Siemens, RTL, ITV, the BBC, France Telecom, Orange, Deutsche Telekom, MTN, The Financial Times, DDB / TribalDDB, Ogilvy, Omnicom, the European Commission, the Government of New Zealand and many others.