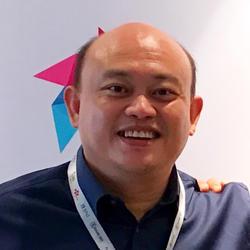 Edi started his career at Kompas Gramedia in 1997 as founder of CHIP, a licensed computer magazine from Germany. Following the success in Indonesia, he led the company’s expansion from 2004-2006 to publish CHIP magazine in Singapore & Malaysia as CEO & Editorial Director. He was a key figures in 2017, reformulating Kompas.com as the leading & respected news site. In 2008, Kompas.com started Kompasiana and successfully transformed to be the biggest citizen journalism site in Indonesia. As key strategist of Kompas.com & Kompas Daily, he initiated digital projects that had won multiple awards in Asian Digital Media Awards by WAN-IFRA.

As Digital Group Director of Kompas Gramedia (holding) in 2012, he expanded the company’s network by leding vertical development and leading Series B funding round of SCOOP, a popular digital newsstand based in Singapore. Other expansion was Mandiri e-cash, a joint venture with Mandiri Bank, providing a revolutionary mobile payment.