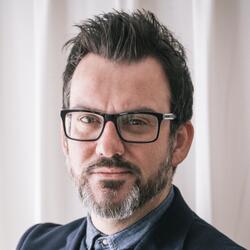 Daniel joined Razorfish in 2011 as Chief Creative Officer, focusing on the creative leadership of Razorfish’s key multinational clients and to work to realise the agency's ambition of becoming the market leader. So influential were his efforts that less than 12 months later he was promoted to Global Chief Creative Officer.

Daniel gets most excited when brands stop ‘talking’ and start ‘doing’, He strongly believes that organisations requires a transformation in thinking, ideas, storytelling, interaction, digital products and utility driven services if they are to keep the promise they make to their audiences and play a meaningful role in their lives.

Prior to joining Razorfish Daniel spent 15 years as a key leader at AKQA, growing the business and working with a large number of the world's top 50 brands. As one of the worlds most awarded Creative Directors, Daniel made a significant contribution to AKQA’s numerous ‘Agency of the Year’ accolades, their reputation as a prominent innovation business and status as a leader in the advertising industry.