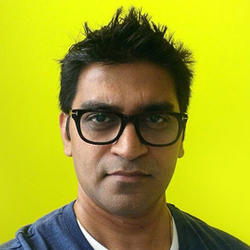 With over 18 years of experience, Carlton’s expertise in the digital arena is imaginative and inspiring, giving HDS a creative edge in the industry.

With an agile and dynamic team of visualizers, designers, and copywriters, he has been responsible for creating over 3,500 websites and games for domestic and international clients and has worked on more than 1,000 promotional campaigns over the years – winning innumerable accolades including the PMAA’s, Abby’s and the Globes among others.

Carlton joined Hungama in 1999 and has been instrumental in creating the brand it is today. Under his aegis the team works on ideas across multiple devices, apart from the PC, like WebTV, IPTV, Tablets, Mobile and new App platforms like the Intel App World.

Carlton has been on the Jury Panel of the Cannes Advertising Awards in 2012. He is also on the jury of the Abby Awards (Ad Club of Bombay) and Yahoo Big Idea Chair Awards and was part of the jury in the New York Ad festival in 2010 and Adfest Asia in 2011.

In his spare time, as and when HDS can spare him, Carlton watches the best that Hollywood has to offer and stays 100% updated on digital trends and the latest English television series alike.