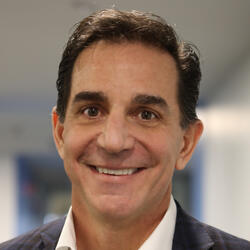 Bob Lord is one of the world’s leading authorities on the use of data and emerging technologies to transform how businesses engage with their customers.

Bob is Senior Vice President, Cognitive Applications, Blockchain and Ecosystems at IBM where he is responsible for infusing AI in all IBM applications. He also leads IBM Developer Ecosystems and is focused on enabling the world’s developers to access IBM tools at scale. He was appointed in 2016 by Chairman, President and CEO Ginni Rometty as the company’s first Chief Digital Officer with a mission to change how IBM innovation is delivered and consumed by the world’s leading organizations.

Bob has rebuilt IBM’s digital platforms to make it easier for clients and partners to access and deploy IBM technologies, while strengthening ties with the VC-backed startup community to ensure a steady stream of new innovation. His focus on breaking down silos, agile ways of working and instilling a startup mentality in the 108 year-old company have transformed how IBM engages with clients.

In 2018 Bob launched Call for Code, a major initiative to give developers and data scientists ubiquitous access to IBM tools and technologies as a means to solve global, societal challenges. IBM has used technologies like Watson, blockchain and IoT to solve some of the most pressing issues in healthcare, financial services and government. Now in collaboration with the United Nations, the American Red Cross and the Clinton Foundation, IBM is helping the world’s 23 million developers use those same technologies to address one of society’s most pressing concerns: the growing human devastation caused by natural disasters. In the inaugural year of Call for Code, over one hundred thousand developers worked in teams to find immediate technological solutions to aid in disaster preparedness and relief, with the winning solution being rolled out in 2019.

Prior to IBM, Bob served as President of AOL, leading the company through its evolution into a leading, global advertising platform. He also served as CEO of Razorfish, a pioneering digital transformation consultancy helping companies such as Ford, Pfizer, Conde Nast, Mercedes-Benz and Cisco redefine their brands for the digital age. He captured his experiences at Razorfish in the book he co-authored, Converge: Transforming Businesses at the Intersection of Marketing and Technology.

Bob’s experience and passion have made him an active member of the TED community and a board member for Williams-Sonoma and Screenvision Media.

He started his career as an engineer, graduating from Syracuse University with a BS in Industrial Engineering and Operations Research, before going on to graduate with an MBA from Harvard University.

He shares his passion for discovery with his wife and three children, and competitively participates in a number of outdoor activities and sports.