Topps, long known as the pre-eminent baseball trading card company, has evolved with the times. For more than two years, Topps Digital has been developing and publishing apps including BUNT, HUDDLE, and KICK.

Featured by Apple as a "Best New App," BUNT is the exclusive digital trading card app of Major League Baseball. The free app, which is monetized through in-app purchases, allows the next generation of baseball fans to collect digital cards and play them during baseball games to earn points in real time.

App-specific ad units on social networks Facebook and Twitter - both heavily integrated with Fiksu - which allowed Topps to:

“The level of targeting on Facebook was great. It allowed us to fully exploit the affiliations that fans have with their favorite teams. By isolating certain segments, we were able to customize the creative for better click through rate and conversion rate. As a result, we were able to quickly coax certain cohorts into break-even and ROI-positive territories.”

With the help of Fiksu’s optimization and expertise on Facebook, Topps was able to:

More importantly, it was able to do all this while remaining ROI-positive.

Topps saw some of its highest returns—in excess of 1000%—when targeting interests like MLB.com and Sports Illustrated. The biggest key to Topps’ success, however, was in targeting unique segments of fans of particular MLB teams. In doing so, they found that campaigns targeting Baltimore Orioles fans resulted in a 260% ROI, while campaigns targeting Oakland A’s fans were equally as impressive, with 330% ROI.

Perhaps the most interesting thing about these results was the impact it had on Topps above and beyond mobile. “Facebook helped with the efficient acquisition of users that led to an ROI, but Facebook also gave us market research and insights we could use when making decisions on ad buys in traditional media,” said Bramlage.

“We did so well with Oakland and Baltimore on Facebook that we decided to run a pilot for television commercials in those markets. The pilot was small and went well, but we wouldn’t have known those were the markets to target for a more traditional ad buy had we not had success on Facebook first,” he said.

Topps also enjoyed similar success as an early adopter of Twitter’s Mobile App Promotion products. By capitalizing on Twitter’s immediacy, Topps ran successful campaigns around the 2014 MLB All-Star game by targeting handles and interests related to the event in real-time. Best performing campaigns quickly realized ROI of more than 300% with high purchase rates. In fact, despite accounting for only 32% of media spend during this time period, Twitter accounted for 78% of all purchases.

Thanks to these successful results, Topps is continuing its partnership with Fiksu to promote its other apps, HUDDLE and KICK.

“As a lean organization, we’ve been able to rely on the value-added services that we get from our Fiksu team. It’s not just that Fiksu brokers the buys and the placement of ads with multiple ad networks, but they help with aggregating the results and providing a way to navigate all that data. Where we are in the growth of these apps, it would have been very difficult to have done this in-house.” 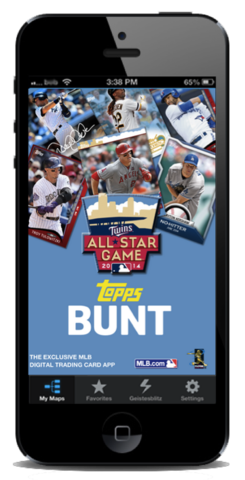