No Question About It: Plain Vanilla Games Partners with Fiksu to Jump Start QuizUp's Virality

No Question About It: Plain Vanilla Games Partners with Fiksu to Jump Start QuizUp's Virality

There are one or two games that go viral every year — Angry Birds, Rayman Jungle Run, and Candy Crush are recent examples — but these games are the exception. In fact, it's relatively hard for game apps to go viral.

QuizUp, the incredibly popular trivia game, was able to defy the odds and become the “fastest growing iPhone game in history” by partnering with Fiksu to jumpstart their success. A key to that success was their incredible ratio of 10 organic users for every paid download — a rate 20 times the industry average during their first week, thanks to built-in viral features and Fiksu's marketing expertise.

Since QuizUp launched in November, enthusiastic users have been challenging friends or strangers to quick seven-question rounds of trivia questions. It pits users against one another in real-time or asynchronous matchups across over 300 topics — with new topics being introduced regularly. But its success wasn't guaranteed by any means.

Plain Vanilla Games, the company behind QuizUp, had previously launched a preschool learning app, and despite being highlighted in the App Store, the game didn't sustain app store success. As CEO Thor Fridrikksson told Wired.com, "We thought if we made a really good product it would just sell, but that's not the case."

When the team came up with a new idea, “a social app modeled after Trivial Pursuit,” they were determined to pair a good product with a good marketing plan. But as Neal Ostrov, Chief Marketing Officer at Plain Vanilla Games, said, “there is a negative connotation towards mobile trivia games and not many people have been able to crack [this category] in the past.” So, Plain Vanilla partnered with Fiksu to provide the promotional boost needed to succeed in the App Store.

QuizUp built virality into their game: players can challenge friends through social sharing tools or through manual invitations. The QuizUp team knew that finding users that had the highest propensity to invite friends would give them the greatest return on their marketing spend.

For those viral effects to work, QuizUp needed to acquire a critical mass of users to support the social mechanics. Fiksu and Plain Vanilla created a launch plan which kept this in mind — and from the beginning, QuizUp exceeded expectations. They saw near immediate organic uplift, and climbed the charts rapidly from the very first day. In less than a week they had reached the top spot overall in the App Store.

Fiksu knew that supporting QuizUp's initial success would be a challenge, and immediately started testing a wide range of creative on both banners and videos. Working together, the two companies figured out which messages and colors were the most effective.

Because the app itself was so popular, serving up these high-performing creative ads led to an ongoing stream of new conversions. Within a month of launch, QuizUp had attracted 5.5 million registered users who spent an average of 35 minutes a day playing — earning them that title of “fastest growing iPhone game in history.”

QuizUp was able to get to around a $1 CPI for non-incentivized traffic, well below the industry average. More importantly, QuizUp was generating a 10 to 1 ratio of organic to paid installs. Typically, a 1:1 ratio is stellar, so QuizUp was 10x the industry best in their first week on the charts.

The real achievement for Plain Vanilla is keeping those costs low at their incredible scale: QuizUp hit 1 million users in eight days, 3.5 million in three weeks, and more than 10 million to date.

In addition to enabling this massive growth, Fiksu complements Plain Vanilla's lean marketing team with a consultative partnership. The Fiksu team is able to vet various networks for the QuizUp team to get a sense of where volume is and where the best potential is for scale, quality traffic, or low CPIs. Fiksu also provides advice on tactics like exactly when to use holiday-specific creative during the holiday season.

But even a lean team needs to understand their data — and the Plain Vanilla team consults Fiksu's dynamic dashboard daily to stay on top of their campaign performance. They also use the dashboard as a central place to manage all their direct publisher relationships. 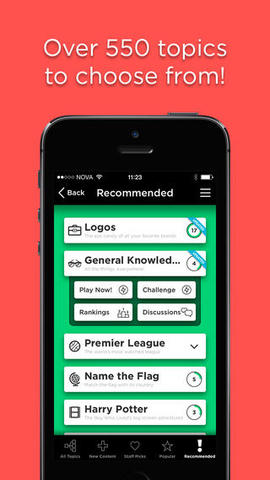