Elements Therapeutic Massage in Palatine, IL wanted to truly test the effectiveness of their marketing message using various marketing channels. As part of a Chicago-based pilot program with Iris Mobile, a 3 part test was conducted to track the results. The test included email, SMS and Rich Media Messaging when delivered to the same audience with a similar offer over the span of 3 months. The findings were as follows:

For Elements Therapeutic Massage, the redemption rates from Rich Media Messaging were 91% higher than the same campaign sent via SMS and also resulted in an outstanding ROI of 2,500%.

The key to this success is due to 2 major factors. The first being market penetration. With SMS and Rich Media Messaging the open rates and response rates to these types of campaigns are exponentially higher than using other forms of marketing media. The root cause of this result is consumer behavior. Mobile phones have almost a 100% marketing penetration rate in the United States and most of the users keep these devices within arm’s reach 24 hours per day. It is also important to note that 97% of all messages are opened and 90% of these are opened with the first 3 minutes. With response rates as high as these, it’s not a mystery as to why the response rates for both SMS and Rich Media Messaging are higher than email.

The second major factor is customer engagement or the wow factor. When an image based message is sent (as in the case of Elements), the emotional reaction from the customer is substantially stronger than the reaction a customer has to a 160 character message. When sending a promotional offer via Rich Media Messaging, the customer responds to a familiar format and relevant imagery, which ultimately initiates the desired response – in this case, booking an appointment.

According to Rosie Novello, Manager of Elements Therapeutic Massage Spa, “Rich Media Messaging takes direct mobile marketing to a totally new level. We have used SMS previously to market our services to our clients but after switching to RMM our results improved drastically.” 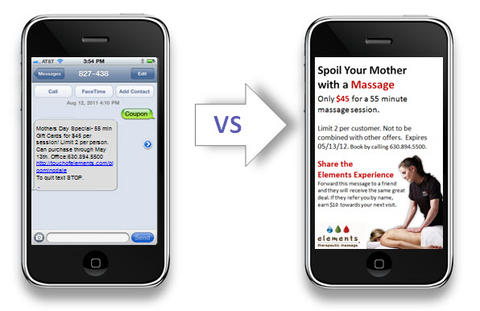