Paramount Pictures: Dora: The Lost City of Gold: Pack Your Adventure with Dora

Paramount engaged children by creating an interactive game that helped drive awareness of its new movie, Dora: The Lost City of Gold.

The KPI was engagement with the target audience, which was measured via the plays and time spent on its interactive game.

The target audience was made up of children between the ages of six and 12, along with their families and fans of the existing Dora the Explorer franchise. There was a Hispanic skew.

Paramount reached its target audience by carefully selecting malls that over-indexed for Hispanics and kids in households. It decided that gamifying creative would be the best way to engage its target, and in turn immerse them into the Dora world of adventure.

Paramount created an interactive game that was presented at 13 malls across the country, engaging children with the premise of the film: packing for a Peruvian adventure. The touch-enabled actions allowed players to "swipe in the good" and "swipe away the bad" to Dora's backpack and rack up points.

The results were impressive: 48,000 total plays, 32 percent played more than once, more than 11,000 total minutes played, and 95 percent of the experiences played through to the trailer.

Paramount Pictures: Dora: The Lost City of Gold: Pack Your Adventure with Dora 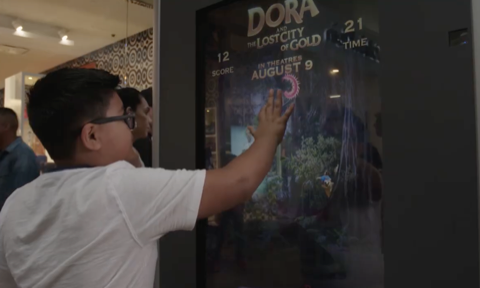