Zhonghua was a 60-year-old toothpaste brand that was losing relevance in the Chinese market. To help rejuvenate the brand and stimulate smiles among young adults, it enlisted celebrity star power and created an innovative “Smile-fie” app that helped users to smile. With the smile-powered app, users just needed to look and smile, and let Zhonghua do the rest. The images were easy to share, and a gamification approach earned points for users while also helping to fund corrective surgery for children suffering from cleft palates.

While China’s rapid economic development has lifted millions out of poverty, it has come at a cost: people in China are just not as happy as they used to be.

Zhonghua, a toothpaste brand with 60 years of history in China, was losing relevance and preference with the younger female urban Chinese audience.

Unilever needed to reconnect with this audience and deliver Zhonghua’s core promise of helping users discover their smiles. Leveraging the female audience’s love affair with mobile, the company used a selfie photo app to engage with the audience and also drive both reach and scale for the brand.

The target audience of young, post-1980s urban Chinese have spent most of their lives striving for success in an increasingly competitive landscape. The result? While material wealth has improved living environments, it has not necessarily improved quality of life. These stressed young adults feel that they have less reasons to smile. 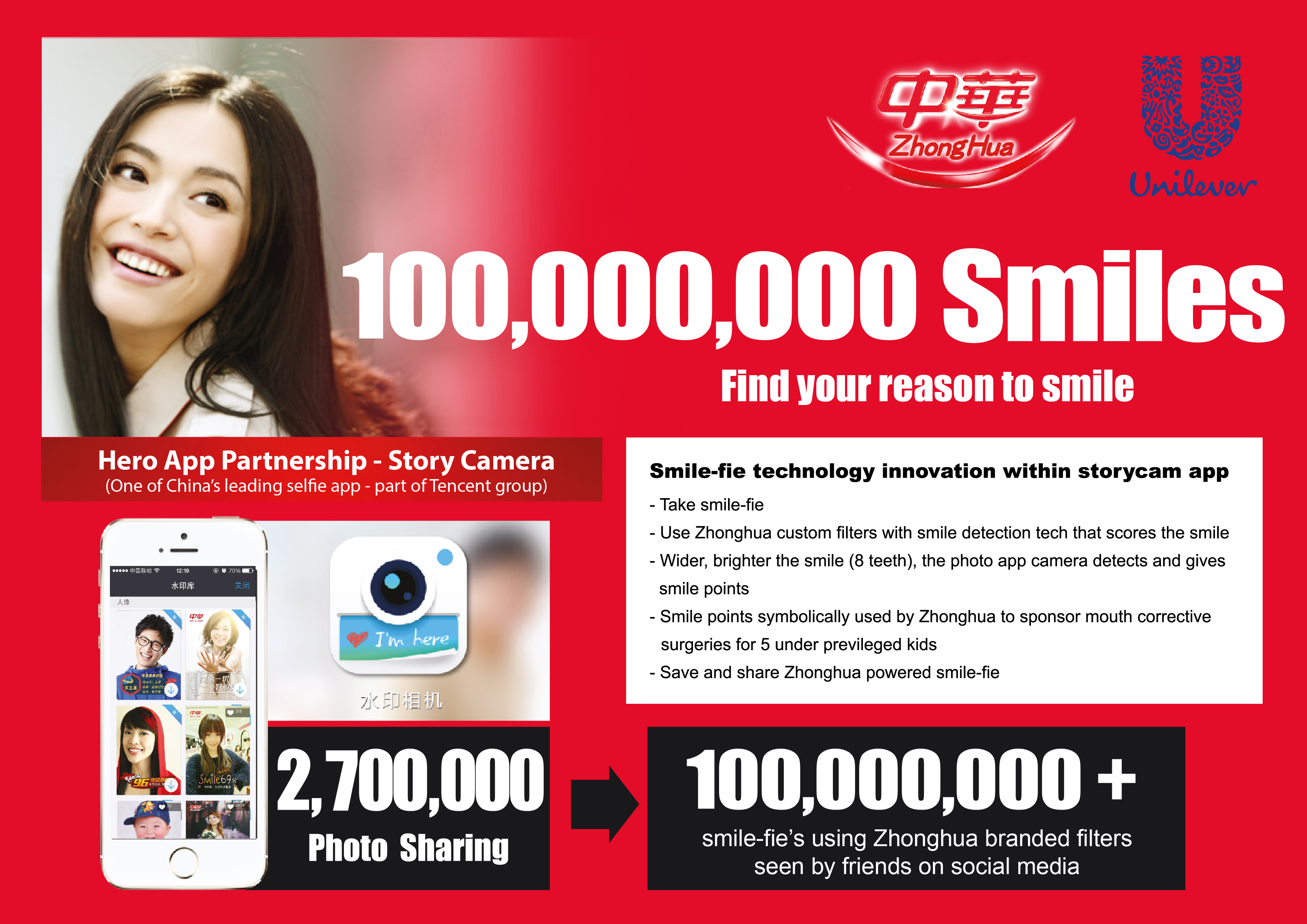 Since more than 65 percent of the ’80s- and ’90s-generation Chinese female mobile owners use a selfie app, and photo editing/sharing apps rank as some of the most downloaded, these became the perfect platform to generate more Zhonghua smiles in China. Using mobile and integrated content, the brand helped the young adult female audience in China find a reason to smiles, re-energizing their perception of Zhonghua and transforming the business along the way.

A smile is contagious. This simple idea was the basis of the campaign, and the brand created three pillars to help its audience find their reason to smile, share their smiles, and spread smiles to others.

In this first year of the campaign, Zhonghua actively used mobile and mobile photo app technologies along with rich video content as the way to inspire and enable its audience to discover their smiles.

Find Your Reason to Smile

Celebrity Yao Chen’s warm character always cheers up Chinese fans. Leveraging her influence, the brand invited her to create an inspiring micro-movie about how finding her reason to smile changed her character’s world. The story centers on Chen’s character, a world-weary photographer burnt out by urban life, gaining a glimpse into her future. After hearing the wise words of a worldly newspaper street vendor, she comes to understand the importance of finding her own reason to smile.

The film appeared on China’s top digital video platforms, including Tencent and Youku, and on national TV, and was supported by an integrated digital campaign. Offline support included magazine, PR, and events. Even the newspaper vendor character became a catalyst , which led to Zhonghua becoming the first brand to advertise on more than 1,600 newspaper stands in Shanghai, with exclusive “Let Us Smile” posters inviting people to use their mobile phones to scan the QR code to watch the branded content.

Using branded content as inspiration, Zhonghua provided its target with a platform to share their smiles. Using Tencent’s selfie app, Story Camera, the brand created a new tool that made it easier for users to capture their best smiles and share them with friends.

Zhonghua’s Smile-fie app added an automatic smile-powered picture-taking capability. Users simply framed themselves in the picture and gave their best and brightest smile. Upon detecting the smile, the app automatically took the picture. With no buttons to press, users just needed to look and smile, and let Zhonghua do the rest. Additional filters and frames made it easier to share images with friends, and by gamifying the experience using the power of smiles to generate smile points, users were compelled to pass their smiles along.

To encourage more smiles, points, and shares from Smile-fie, Zhonghua linked the smile points to its social cause: providing corrective surgeries for children born with cleft palates. The gaming experience made it easier for people to take a picture and generate points while also returning smiles to five children in rural China who were born with severe cleft palates.

Using inspiring branded content, the “Find Your Reason to Smile” film attracted more than 27 million views across online and mobile. By bringing the film’s idea to life through the innovative Smile-fie app, Zhonghua engaged and extended the campaign’s reach.

More than 1.9 million filters and selfie photo frames were downloaded and used an average of 2.5 times per user, with over 2.7 million photos shared across social networks. More than 100 million Smile-fies were seen and shared by friends on social platforms, generating more than eight million retweets.

The campaign had immediate effect on Zhonghua’s business, as sales increased 24 percent over the previous year as well as outstripping category growth by 20 percent and delivering an ROI of 790 percent.

However, it’s the smallest number that means the most: five children received corrective surgeries to fix their cleft palates, helping them to discover their own smiles for the first time. 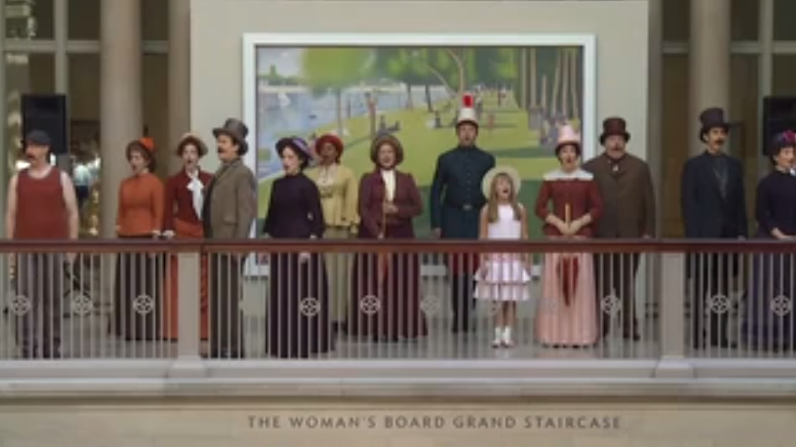 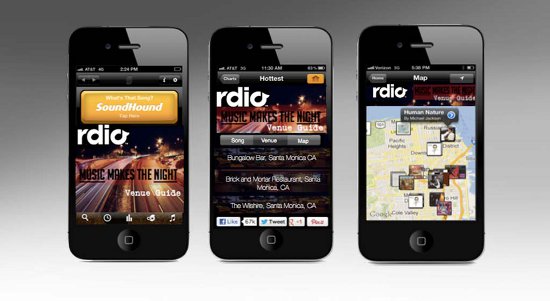 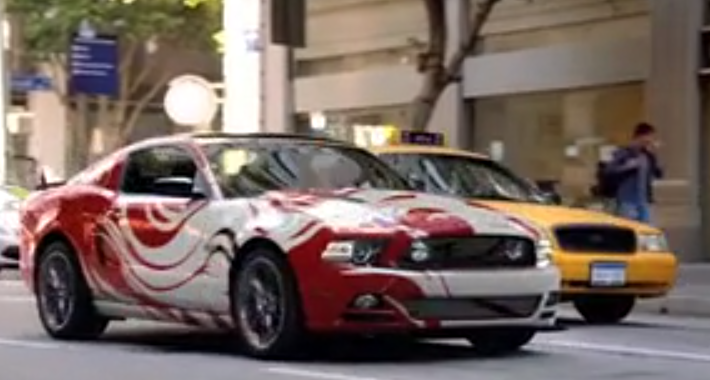