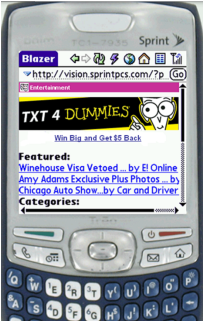 Brand: John Wiley & Sons, Inc.
Category: Entertainment
Agency: N/A
Vendors: HipCricket
Region: USA
Timeline: February – May 2008
Results: The TXT4Dummies campaign was successful in meeting its objectives, drawing more than 1.3 million impressions )330,000 more than planned).  The mobile advertisements resulted in an average click through rate of 1.4%, the Sprint homepage generated incredibly high response rates – 3.51% -- for the campaign, giving Wiley high reach across a network of mobile media consumers )sources: HipCricket and Sprint, May 2008). These rates surpassed the standard click-through for mobile advertising campaigns and were far higher than typical online click-through rates.  Of the hundreds of text entries that were received, there was a 34% conversion rate for consumers joining the TXT4Dummies Club.
Summary: For Dummies reference books are written for those frustrated and hard-working individuals who know they're not dumb, but find that the technical complexities of computers and the myriad of personal and business issues them feel helpless. When it came time to promote its annual “Dummies Month” during the month of March, Wiley Publishing turned to mobile marketing company HipCricket to drive awareness for the popular books while engaging consumers at the point of sale.
Campaign objectives:
This campaign was primarily geared towards women ages 18-34, as they are the primary purchasers of “For Dummies” titles, and leveraged mobile marketing and mobile advertising, with support from other channels such as email, online college newsletters and out-of-home ads.
The mobile marketing promotion of Dummies Month included a text-to-win sweepstakes to win high-end consumer electronics prizes via SMS, using the keyword “DUMMIES” to reinforce Wiley’s Dummies brand.  Once consumers text in DUMMIES to a common short code, their email address was captured and they were sent a rebate for $5 off any Wiley “For Dummies” title.
HipCricket designed and ran mobile banner ads across a number of mobile websites including Sprint’s Mobile Media Network and Nokia Ad Network in order to extend the program’s reach to millions of wireless data subscribers. These mobile ads were designed to drive consumers to the Dummies mobile website )dummies.hipcricket.com) where they could opt-in to the Dummies Month campaign.  In order to target women, ads were placed on the Nokia Ad Network’s Women’s Channel.
The Dummies mobile website, also designed and developed by HipCricket, was intended to support the campaign and offered consumers an easy way to opt-in to receive those offers and rebates via email.  An important element of the site was the store locator, which enabled users to enter the zip code they were in at the time and find the closest store that carried the “For Dummies” titles – helping to drive in-store retail traffic.  The mobile site also included a list of the most popular “For Dummies” titles. In addition, the site allowed users to enter their mobile phone numbers to sign up for the Dummies Club, which would push regular updates to these consumers.