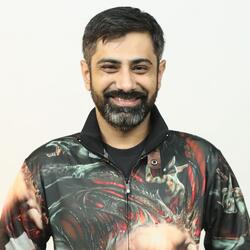 Nikhil Sandhu is the Head of Creative Lab Southeast Asia at TikTok. He leads a team of creatives across multiple markets in Southeast Asia, being the lead creative collaborator within the business marketing division.

His role involves hiring and managing the Southeast Asia Creative Lab team, building processes, innovating new approaches to creativity on TikTok for advertisers, and partnering with the TikTok creator community to teach the industry how to TikTok, while growing relationships with agencies and clients.

Nikhil has experienced a varied career, with stints as a cinematographer on wildlife documentaries and as a producer of television ads.

He also led content strategy at Aircel (one of India's largest telcos), and was a Supervising Producer with the TV channel 'Colors',

where he worked on some of the biggest hits on Indian television, including the Indian versions of Big Brother and Fear Factor and various other fiction and nonfiction programming.

He has also consulted for startups and media houses, including leading Nestle's Content Studio in Gurgaon in India.

Prior to TikTok, Nikhil was the Studio Head at Miss Malini, one of India's most successful emerging media and influencer driven online media networks.

Nikhil plays guitar, sharing his love for Prog Rock with his family. He lives with his wife Madhuri, their precocious two-year-old daughter Laetitia, and their adopted chocolate lab Happy.