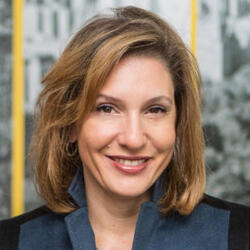 A seasoned media professional with extensive experience across platforms, Janet is EY Global Advisory Services Leader for Media & Entertainment, leading consulting across the sector. She is also the EY Americas Marketing practice leader.

Prior to joining in 2015, she held executive leadership roles at major media, entertainment, and technology companies including AOL, The Huffington Post and Time Warner.

She serves on the board of the Mobile Marketing Association, the International Academy of Arts and Sciences, and PRX. In 2018, she was named a Women To Watch by Multichannel News, she was named a 2017 Woman of Excellence by the National Association of Female Executives, in 2010, she was named as one of Advertising Age’s Women to Watch, and in 2006 she was named among Crain’s 40 Under 40. She is an advisor to the Harvard Business School Digital Initiative.

Janet holds an MBA from Harvard Business School and a BA in Political Science from Columbia College.