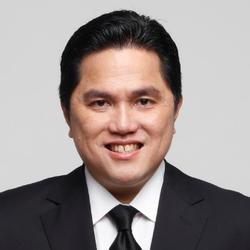 Thohir, a United States-graduated Indonesian entrepeneur is the Founder and Chairman of Mahaka Group – a media, sports, and entertainment company.

In 2011, Thohir joined the consortium that bought the NBA Philadelphia 76ers. A year later, he became the majority owner of a Major League Soccer club, D.C. United.

In November 2013, he acquired a controlling stake of 70% in F.C. Internazionale, becoming Inter's 21st President and the club’s 1st Asian President.

In addition to his international sport business, in 2012 Thohir developed Liga Mahasiswa (LIMA), the largest student league in Indonesia, followed by the Indonesian Basketball League (IBL) which he acquired in 2016.

Apart from the sport business, Thohir’s media company, Mahaka Group, is one of the leading media holdings in Indonesia with numbers of media platforms such as TV and Radio Stations, Newspaper, Digital and Out-of-Home.

His tireless dedication to sports led to his appointment as the Indonesian Chef de Mission at the London Olympics in 2012, which brought him to his current role as President of the Indonesian National Olympic Committee (NOC) for the period 2015-2019 and in charge of organizing the 18th Asian Games Jakarta-Palembang 2018.