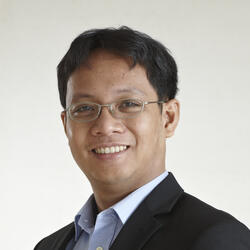 Chief Executive Officer
Mobext Philippines
@artpolicarpio
Arthur R. Policarpio is the co-founder and CEO of Mobext Philippines, the regional centre of excellence of Mobext, the mobile division of Havas.
Arthur is a pioneer in digital and mobile marketing in Asia, with more than thirteen (13) years experience in digital/mobile marketing. He has worked on digital/mobile strategy and execution for various top companies across the region, such as: Unilever, Procter & Gamble, Coca-Cola, McDonald’s, Pfizer, DBS Bank, Indofood, and many others.
Under his leadership, Mobext Philippines has won numerous awards and accolades in the Philippines and across the region.  From 2013-2015, Mobext Philippines has won 14 local and international awards from various top mobile/digital awards shows, such as the Mobile Marketing Association APAC Smarties, Mobile Excellence Awards, as well as the Philippines Boomerang Awards.
He is a sought-after speaker across Asia-Pacific in mobile, and has spoken in various prestigious industry events such as: Festival of Media in Singapore (2015), AdTech ASEAN (2014), Mobile Marketing Association Forums (Vietnam, India, Singapore, Shanghai), Spikes Asia in Singapore (2014), and many others.
Arthur is an industry leader in the Philippines, having co-founded the Internet and Mobile Marketing Association of the Philippines (IMMAP) in 2007, the country’s official organization for digital companies with more than 100 member companies.  He served as IMMAP’s Founding Vice President in 2007 and 2008, and as President in 2009.