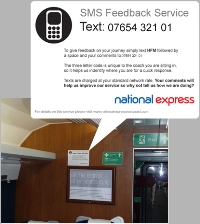 National Express Group is one of the leading public transport companies in the world. Their East Coast Trains runs fast and frequent passenger service from London Kings Cross via the Midlands and Yorkshire up to Scotland, carrying over 100 million passengers a year!

National Express East Coast has a target for responding to written passenger feedback within 10 days, set by the Department of Transport. This was using up staff resources, and the feedback was always too late. What National Express East Coast needed was a way to capture passenger feedback instantly, so that they could respond straight away with minimal hassle and staff resources.

In addition National Express East Coast needed an instant feedback service to alert them to problems so that they could fix them the next time the train reached a terminal, rather than a problem waiting for days to be spotted by staff and repaired, inconveniencing other passengers in the meantime.

Rapide provided the award winning Rant & Rave service to capture passenger feedback and comments from every carriage on every train on the National Express East Coast network - instantly!

Rant & Rave allows National Express to engage with their customers allowing them to provide insightful feedback via SMS. National Express immediately responds to the customer letting them know how they will solve the reported problem or thanking them for their positive comments.

"Receiving feedback via SMS has helped us save time, improve our customer's experiences and even save paper!"

National Express promotes Rant & Rave by fixing a sticker at either end of their carriages. This helps customers become aware of the service and also has clear instructions on how to leave comments:

Once the feedback has been provided by a customer it gets analysed using the Rant & Rave Sentiment Engine. It works by analysing comments by looking for sentiment and provides a score (1-5), It then places the comments into multi-categories based on what the customer is saying. The Engine also identifies actions; these are immediately sent to a relevant person at National Express who acts on them right-away.

"Rant & Rave has enabled us to bring customer relations into the 21st century. It's an extremely useful tool for analysing customer comments and enables us to measure improvement. The service has been easy to implement and cost effective for our organisation. Although it has only recently been launched it's clear to see customers are using it!" 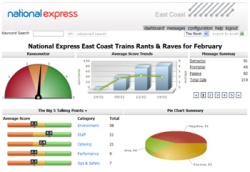 Once the feedback has been analysed it gets displayed in The Dashboard. It displays
real-time graphs, statistics, categories and league tables as well as individual comments. It gives a clear indication to National Express about how their brand and services are being perceived.

"Before choosing Rant & Rave we looked at several other solutions in the Market. We decided Rant & Rave would be the best because of its value for money, informative website and blue chip client base"

"Since using Rant & Rave we have found Rapide to be an honest company who are prepared to show us their services; 'warts and all' It's clear that Rapide are hungry to make an impact in the Rail Industry." 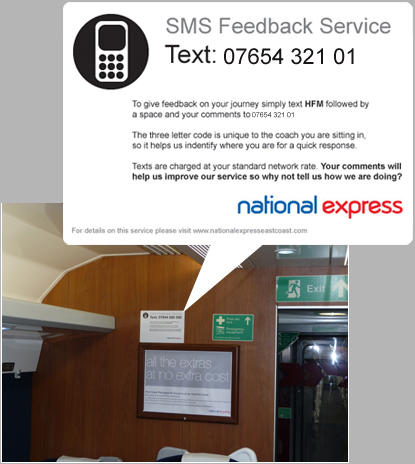 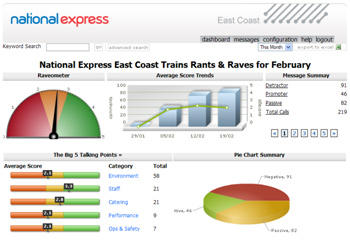 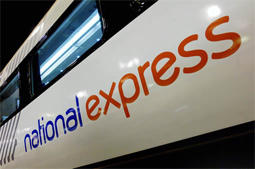