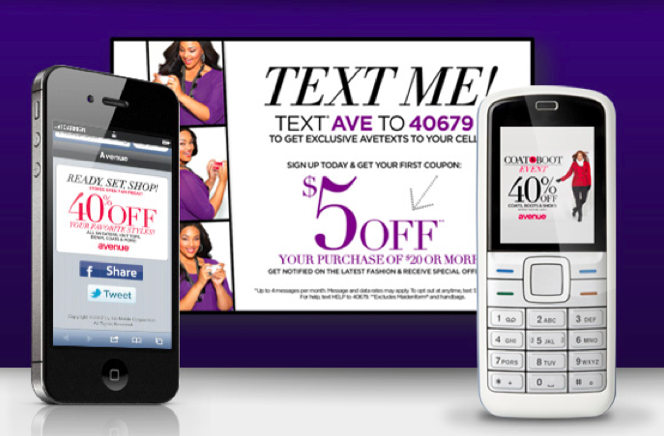 Avenue (www.avenue.com), a source for affordable fashion for real size women, launched a national campaign using Rich Media Messaging (RMM) technology on November 8, 2012.  The campaign has been promoted through advertising in-store, online, email, and via social media encouraging customers to opt-in by texting to a shortcode.

How does this campaign work? Opted-in customers receive weekly messaging promotions with compelling imagery enticing recipients to go in store and purchase the latest fashions. The RMM platform automatically detects and optimizes messaging content individually for all different mobile devices so customers can view content clearly on their screens, resulting in very high engagement rates. By using this technology, Avenue is able to send coupons and other promotional imagery without having to worry about device and content limitations at standard messaging rates.

This data can now be used to further optimize the campaign in the future. Previously, Avenue used a SMS based campaign to send promotions to customers. However, by switching to Rich Media Messaging, Avenue increased mobile messaging response rates, and has constantly achieved an ROI of approximately 6,600% for this campaign. Moreover, multichannel promotional approach for the messaging program results in over 30% increase in opt-in list membership per month. Campaign results show that sending personalized, value based content has a direct impact on response rates. These results show that sending image-based content has a broader appeal and tells a more compelling story, than simple text alone.

According to Julie Daly, President of E-Commerce for Avenue, “Not only did Iris Mobile’s marketing solution improve customer engagement for Avenue’s messaging program, but also it generates significant growth in our monthly revenue that wouldn’t be possible otherwise.”