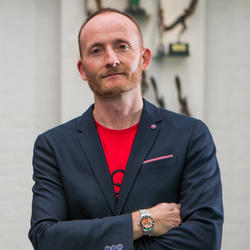 Pete was recognized as one of the world's top 10 Chief Creative Officers in Drums prestigious 2017 Global Network Rankings.

His marketing journey began with an honours degree in Graphic Design at Middlesex University in London. After a ten year career in film, design, digital and animation, during which time he won 2 Emmy awards, he moved to South Africa in 2000. Four years later founding Gloo which, under his leadership, won AdReview’s Digital Agency of the Year for eight consecutive years. He became the first digital representative to be appointed to the Creative Circle committee and has judged local and international awards including Clios, Webbys, Promax, Dubai Lynx, One Show, Bookmarks and Loeries.

He is currently ranked 1stin the national creative rankings and in 2016 was recognized with the prestigious ‘Best contribution to South Africa’s Digital industry award’ by the IAB Bookmarks.

When Gloo merged with Ogilvy in 2015, Pete assumed his current role and has successfully steered the studios to new creative heights and into becoming, what is recognized by the industry as, the most digitally integrated agency in the country. Under his leadership, Ogilvy South Africa has won 3 consecutive Grand Prix awards at the Cannes Lions advertising festival.