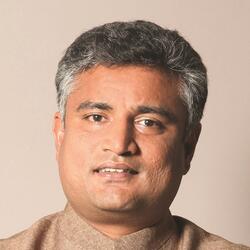 Most recently as GroupM’s COO South Asia, he was responsible for driving operational excellence, while leading teams across OpCos, Trading, and Specialised Units to drive client delight while fortifying partnerships.

Prior to that, Prasanth oversaw Mindshare’s rapid expansion in the market as its CEO. Bringing it to a market-leading position and winning numerous global awards. Under his leadership, Mindshare India developed a record for the most number of new business wins by a single market and created a tradition of external accolades, including a Glass Lion at Cannes, a Grand Prix at WARC and an average of over 250+ external awards per year. Mindshare India was also recognized globally as number 2 in the Gunn report. Prior to Mindshare, he led the GroupM Central Trading Group across South Asia and championed exciting partnerships in digital and traditional media.

Prasanth has held several roles across Mindshare and GroupM over the years. Prasanth joined Maxus Bangalore in 2004 and now has spent more than 15 years with GroupM. PK, as he is known amongst friends, is an MBA graduate from Madras University. He was the first Indian to win the APAC Media Planner/Buyer of the Year title.