Dunkin' Donuts launched on-the-go ordering to improve the guest experience for its existing DD Perks members and increase enrollment in the loyalty program. The brand also partnered with an extreme sports athlete to highlight the speed of the new ordering system in a campaign with 70 percent mobile media budget allocation. The #WTFast campaign generated 155 million video views and increased new app users, making mobile ordering DD's most successful operational change since the drive-thru.

Dunkin' Donuts spent almost two years developing its new app with on-the-go ordering technology for DD Perks loyalty program members. This enhancement marked the brand's largest operational change since launching the drive-thru, and was a response to the immense growth in mobile ordering seen by competitors like Starbucks and Panera.

Dunkin' wanted to create a campaign focused on mobile app awareness, download volume, and mobile ordering usage. Total campaign impressions, gross mobile app downloads, and the percentage of guests who tried and continued to use the app would be used to measure full-funnel performance. Competitive benchmarks within the restaurant industry were used to establish goals.

The campaign had two audiences. It alerted DD Perks loyalty program members that mobile ordering was now available to them in the Dunkin' Donuts app. It also served as an acquisition play, encouraging Dunkin' Donuts guests who had not yet enrolled in DD Perks to do so to receive this benefit.

With store locations across the country, there is significant demographic diversity among both the DD Perks member base and Dunkin' Donuts guests at large. However, from a psychographics perspective, these consumers are modern, approachable, and driven. Their on-the-go lifestyles prompt a need for reliable, convenient service, so mobile ordering was pivotal in enhancing their Dunkin' experience.

To drive awareness and downloads of the app, Dunkin' used a 360-degree campaign that engaged viewers by highlighting the benefit of speed. The #WTFast campaign focused on capturing the World's Fastest Dunkin' Run. Leading the charge was wingsuit athlete Ellen Brennan, the world's fastest flying woman. She leapt from a cliff more than 8,000 feet high and grabbed her Dunkin' order at speeds over 120 mph, becoming the first athlete in her sport to grab an item mid-flight. The entire process was filmed.

Media buys were strategic against the type of content developed. For one week, the brand teased the World's Fastest Dunkin' Run to build intrigue and buzz. It unveiled the new app with broadcast, digital video, 360-degree video, social media, print, in-store, radio, and OOH. The brand also shared behind-the-scenes content and special offers with all members (old and new).

Approximately 70 percent of the campaign budget was allocated toward mobile media. Dunkin' Donuts leveraged mobile tactics and targeting on social platforms like Facebook, Twitter, Instagram, and Snapchat along with digital video targeted to mobile devices on YouTube and through programmatic media. The campaign leveraged best-in-class mobile tactics, including native social ads and tested new technology such as 360-degree ads on Facebook and YouTube. DD was one of the first advertisers to use "swipe up" to download ads on Snapchat.

From a content perspective, the brand was able to leverage mobile as a way to support the video content, especially the 360-degree video for the #WTFast campaign. An integration with Kochava allowed the use of real-time data to help guide the retargeting strategy to sequentially serve creative messaging aligned against observed user behavior within the app.

The campaign reached the most loyal Dunkin' Donuts customers through in-app event targeting and custom audience matching against known Perks members. By leveraging first-party data, the brand was able to reach the most relevant audience for on-the-go ordering and then used lookalike targeting for prospecting against new, non-Perks members.

Dunkin' Donuts has maintained its position as a key player in the highly competitive quick-service restaurant landscape. Mobile technology will now be a key differentiator in how Dunkin' Donuts sees the future of ordering. The integrated campaign tallied more than 11 million views in just the first two weeks after launching, resulting in more than 134 million impressions and a 44 percent increase in new app users. In total, the #WTFast campaign has generated 155 million views of the digital videos, making it DD's most watched digital video campaign to date. Trial and retrial of the mobile ordering functionality is on track to outperform the program's goals, which were based on competitive benchmarks. 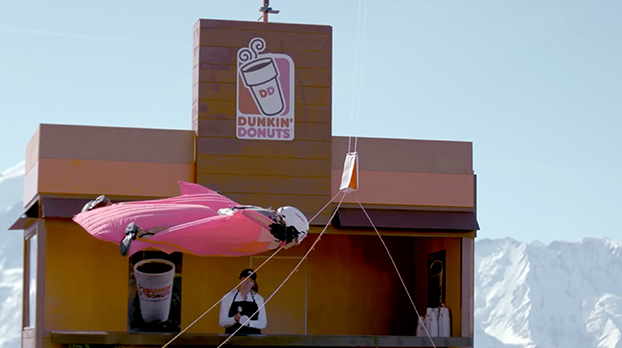