To build up a younger audience for the Galaxy Camera, Samsung launched a superior point-and-shoot camera with Android apps and connectivity, giving the camera all the capabilities and benefits of a smartphone but with the ability to take better pictures. Influencers within the Millennial community helped drive awareness of the camera’s increased capabilities by posting improved photos on social media sites to raise awareness of the key differences in quality between simple Android phone cameras and more sophisticated Samsung Galaxy.

Millennials use photography both for capturing the moment and to gain social currency, but in order to do that, the photos need to look professional and polished with artistic qualities. The key message focused around the fact that phone cameras will never have the same quality of images as compared to the Samsung Galaxy Camera. But, to attract Millennials, Samsung needed to outfit the camera with smartphone-like functionalities.

Millennials often think about posting photos Facebook or Instagram before actually taking the picture. Their mindset is that if it wasn’t photographed, it didn’t happen. Enlisting the help of top influencers helped bring the “Life’s a Photo — Take it.” campaign to life.

Samsung recruited 32 prominent Instagrammers in eight launch markets. These Instagrammers were asked to positively photograph their cities using the Galaxy Camera. Photos were then uploaded to Tumblr, which was connected to Instagram and other networking sites. Fans voted for their favorite pics, and the city that won the most “likes” received an elaborate party in the photographer’s honor.

Samsung took the campaign to the next level by assigning each photographer a specific camera mode to create eight videos profiling the photographers. Each mode highlighted the Galaxy Camera’s capabilities, such as capturing rich tones of color, waterfalls, and action shots, and photographing micro images. These videos — highlighting photos taken in such places as Amsterdam, Berlin, and Madrid — were housed in a variety of custom-display media. Additional photos were taken by premier partners, further populating the sites and building campaign bandwidth. 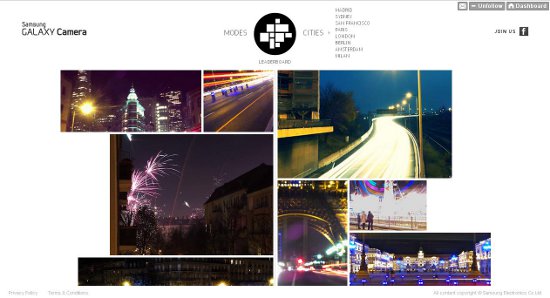 When Instagrammers participated in the “Life’s a Photo — Take it.” contest, they demonstrated to their network of followers the superior photo quality of the Galaxy Camera. The campaign positioned Galaxy Camera at the center of a world obsessed with posting photos online, driving lifts of 58 percent in awareness and 115 percent in purchase intent. In addition, the Tumblr program garnered over one million clicks, while the videos received 1.3 million YouTube views  — more than 300 percent above benchmark!