Young people are all about games. With the aim of engaging kids between the ages of 8 and 12, Grupo Globo channel Gloob produced its first Brazilian sitcom inspired by the world of gaming: the live-action Bugados.

Gloob needed to create brand awareness for the launch of the new TV show, which would be released in October 2019. It needed to promote the show with something more than a TV campaign, which was not enough to attract kids who spend most of their time on mobile screens.

The campaign's main objective was to create engaging content in the digital and mobile universe where kids spend most of their entertainment hours, to grab hold of this audience's attention, and to generate interest for the new show. The end goal was to take the target to TV and increase Bugados' audience.

The target audience for this campaign was kids between the ages of 8 and 12 in Brazil.

To gear up for the launch campaign and keep to the video game theme, Gloob partnered with Gameloft for Brands, who was responsible for building a transmedia journey set in the Bugados universe. The solution was a mobile website with exclusive branded content and lots of mini-games starring Bugados superheroes.

To play these mini-games, kids needed to correctly answer Bugados-related questions. The answers could be found in episodes of the show. Each mini-game unlocked special gadgets and "skins," allowing kids to customize their very own avatar, which could then be saved in their smartphone gallery or shared on social media.

Kids could create holograms, mixing virtual reality with the real world on the mobile website. Kids could also enjoy a gamified video on the website which featured Thiago Leifert, a famous Brazilian gaming broadcaster. 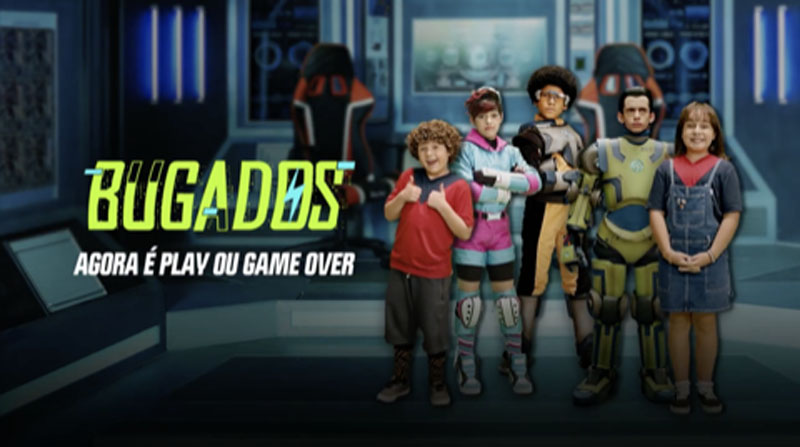 To take Bugados to the next level, a 360-degree launch strategy campaign was built, consisting of commercial breaks on Gloob and on Grupo Globo channels, rewarded videos in-game, press, and out-of-home advertising. The mini-games served as playable ads, and in shopping malls kids were invited to try out the games on interactive screens. They were then redirected via a QR code to bugadosnogloob.com, where they could keep on playing by themselves.

Since Grupo Globo and Gloob have their own media channels and their presence in these traditional media platforms (TV, press, and social media) is very strong, the campaign was mainly invested in developing the mobile website. The mini-games were promoted on other platforms as well, such as digital out-of-home screens, and playable ads were served to the Gameloft's media inventory.

The mobile website was a gamified branded content platform and the whole 360-degree campaign was built aiming to take kids along a transmedia journey between the TV show and the mobile website. In the website environment, kids could imagine themselves as a Bugados superhero — ultimately engaging and involving them by making the show a part of their imagination.

Bugados was the first 100 percent Brazilian sitcom produced by Gloob, and the launch aimed to engage kids from the very onset. Gloob collaborated with Gameloft and successfully engaged kids both online and offline by leading them through an immersive, fun transmedia campaign.

Season two of the show was confirmed three weeks after the show launched and has been live since May 2020.