Sony Pictures Animation leveraged AdColony’s targeting tactics to reach its target consumer audience and build awareness around its new movie title, Peter Rabbit. By gamifying the experience with AdColony’s Dynamic End Card, users engaged and interacted in a genuine mobile-first fashion. After viewing a custom mobile-only movie trailer, they were invited to play a mini-game and view additional video content that introduced and built an affinity for key characters in the story.

Sony Pictures Animation enlisted AdColony to drive awareness and encourage ticket sales for its anticipated movie adaptation of the classic tale of Peter Rabbit through the execution of a mobile campaign. To introduce and build affinity for key characters in the story, Sony used the interactive capabilities of AdColony’s Dynamic End Card.

The target audience consisted of young moviegoers between the ages of six and 12. The user would watch an advertisement through AdColony’s Instant-Play HD Video, and at the end of the video they had an opportunity to engage with the Dynamic End Card that featured the mini-game.

The secondary audience included older movie-goers — i.e., consumers who were already familiar with the story of Peter Rabbit and had young children. The secondary end-card, which featured exclusive interviews with voice actors such as James Corden, Daisy Ridley, Margot Robbie, and Elizabeth Debicki, allowed users to become reacquainted with characters from their childhood through long-form video thumbnail content.

After viewing a custom mobile-only movie trailer, users tapped into a garden environment where they swiped to helped Peter Rabbit chop various veggies as they flew onto the screen while avoiding blackberries.  A haptic vibration response was triggered when the user swiped different veggies, notifying the user of their progress during the game through native device vibration. Every time the user swiped on the correct object, several character animations would play.

Once the mini-game was over, users were given the opportunity to replay and beat their previous score, or tilt their device and tap on character hotspots to watch character videos. Users could also watch exclusive long-form videos or tap to visit the theatrical website. 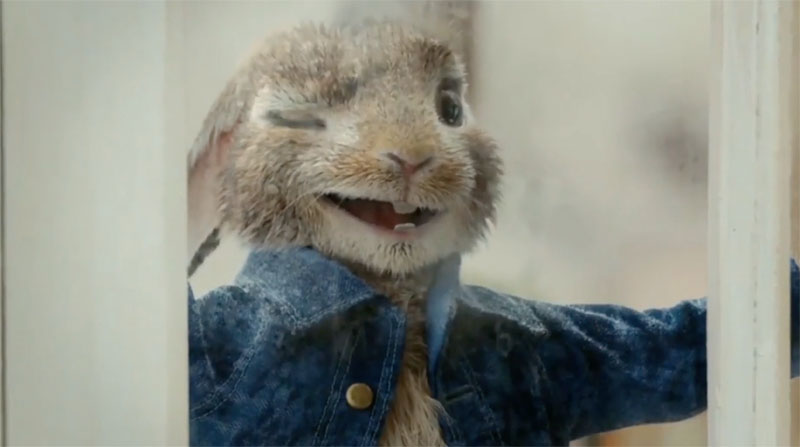 Since the campaign ran across AdColony’s video marketplace, which skews heavily towards mobile gaming placements, a gamified experience was the best solution to keep the target audience engaged during the ad experience. From both a creative and technological perspective, Sony’s campaign execution was extremely complicated and required custom device-agnostic content to meet file size specifications, but also needed specific versions of the experience to run across both Android and iOS platforms.

The campaign ran on iOS and Android smartphone devices, as well as on tablets. In order to leverage native functionality of the device, Sony utilized a simple swipe during gameplay in order to keep engagement at a low barrier to entry and make the game easy for the user to interact with.

Once the user swiped to interact with the veggies and accumulate points, they could see where to slice the object in real time through WebGL video technology. Throughout the experience, Sony supplemented its ads with sound when the user swiped on any object, along with native haptic vibrations that triggered on smartphones if the user swiped an incorrect object.