The WWF used Snapchat, an emerging mobile-only social network, to launch a campaign targeted at the Millennial generation. Playing off the network’s temporary image-sending functionality, the brand created ads featuring endangered animals which, without support, might disappear like the image. 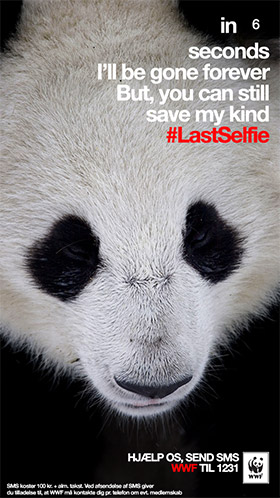 The WWF wanted to increase donations toward helping endangered animals by engaging with the Millennial generation. The brand understood that this segment of consumers spent much of their time posting pictures (mainly of themselves) on social networks, and were difficult to reach through traditional media. Without any media budget to support a campaign, the WWF needed to depend on peer to peer sharing via social media to create buzz. Word-of-mouth, traffic driven to the WWF website, social media reach and donations received were established as the campaign’s KPIs.

The target audience was the 18-to-25-year old age group, both genders. More specifically, WWF targeted Millennials who were active on social and mobile media, especially Twitter and Snapchat. The brand researched the segment’s behavior on different channels (including how Snapchat users shared content, and what types of image were being saved as a screenshot) in an attempt to better understand the group and establish long-term relationships with them.

The WWF used Snapchat, a photo messaging application wildly popular amongst teens. An image sent with Snapchat, when viewed, disappears in seconds, with no chance of being seen again. Just like the endangered animals the WWF protects. The brand subverted the selfie meme, creating #LastSelfie. The campaign used Snapchat’s native timed message functionality to convey the idea that time was running out for endangered species.

Users who follow WWF on Snapchat receive a #LastSelfie, an image of an endangered animal with messaging stating this could be the last time the user sees it. Each image was accompanied by call to action messages requesting either an SMS donation or social sharing of the screenshot for creating awareness. Snapchat users who receive an image they’d like to keep for longer than nine seconds can use their phone’s screenshot function to permanently save it, and share it on social media such as Twitter. Encouraging users to screenshot and share the WWF’s images was vital to the campaign’s success, so the brand teamed with social influencers to help start the trend. Also, messaging on the ad itself served as a call to action for users to save and share the image to help create awareness.

The campaign was exclusively on mobile, as Snapchat is a mobile-only social platform. There was no media budget; the expansion of the campaign was purely organic, supported by several volunteer influencers to increase the impact.

Twitter was the key viral medium for this campaign as a supporting platform. The campaign spread so quickly that after a week, three other WWF offices began using the images and hashtag to spread the message in their markets as well.

WWF has an ongoing agenda of collecting funds for endangered species. The #LastSelfie campaign raised awareness globally for the brand’s causes while helping it collect funds faster than ever.

In the first few hours of the campaign, thousands of people started sharing the messages, helping #LastSelfie go viral around the globe. Within the first eight hours, there were 5,000 tweets being viewed on 6 million Twitter timelines. After just one week, 40,000 tweets hit 120 million twitter users, nearly 50 percent of the overall monthly total. The campaign was started in Turkey and moved to the Denmark market on the second day as planned. However, during the first week, after getting attention from users and media, other WWF offices start sharing the images through their social media channels becoming part of the campaign. With no paid media support, WWF collected its monthly funding target in just first 3 days of the campaign.

The #LastSelfie was picked up by Fast Company, Adweek, Creativity Online, Reuters, NBC and many others around the world as “one of the most clever uses of Snapchat and the selfie trend”, with headlines in more than six languages. The campaign was re-tweeted more than 40,000 times, reaching 120 million twitter timelines.

Kontor Records GmbH: Back to Vinyl — The Office Turntable