BOS Ice Tea, a famous brand of flavored Rooibos iced teas, created a campaign that fused hardware, software, and social media to help spread the word of its cold beverage product offerings. Using a custom-built machine, the company tapped into Twitter’s powerful social network and gave customers a free drink when they shared their experience with friends.

The BOS Ice Tea marketing strategy strongly embraced sampling. The innovative South African brand firmly believed that its product quality was so high that a can in hand was the best marketing tool available. BOS Ice Tea also believed in a different approach to marketing, one that valued entertainment and fun as a tradeoff for receiving a traditional marketing message. To achieve its goals, the company came up with an innovative sampling mechanism that put BOS Ice Tea a step ahead of the competition and introduced it to urbanites between the ages of 20 and 35.

To make the sampling process memorable and entertaining, the company conceptualized and produced the first ever tweet-activated vending machine. BOS linked the real-life experience of tasting its tea with something immediately sharable through consumers’ Twitter accounts. With the massive popularity of smartphones in South Africa, BOS knew most consumers would have access to their social networks in a public environment.

BOS customized the Bevmax 4-45 vending machine’s inner workings with microphones, cameras, lights, and speakers. “BEV the Incredible Vending Robot” came to life, and the machine took on a personality of its own. 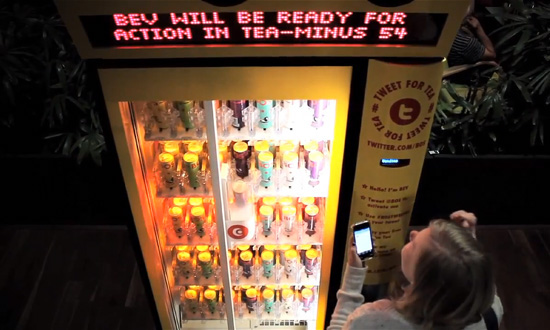 By integrating the machine with Twitter’s social network, BEV dispensed a cold BOS Ice Tea whenever a consumer tweeted using the hashtag #BOSTWEET4T. Thanks to its geo-location feature, BEV identified the user’s location, and whether they were close enough to fetch their iced tea.

One Tech, France 24, and Radio Netherlands Worldwide. Social media channels lit up with the news coverage, and Twitter’s main API Director Ryan Sarver, who has over 275,000 followers, also retweeted the event news.

BEV cemented BOS Ice Tea as a revolutionary and innovative brand in South Africa and the rest of the world.