Submitted by News Over Wireless 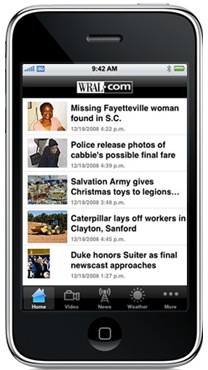 News Over Wireless (NOW) content partners are quickly learning that adding iPhone applications to their mobile product suite means they can capture a much larger, more loyal and ad-friendly audience than is possible with a mobile web site alone.

NOW launched its first iPhone application in December 2008 for WRAL-TV in Raleigh, N.C., and has since launched 18 more with TV partners from around the country. The applications use proprietary analytics code to capture unique user information, page views and video views.

In the four months since launching the first NOW iPhone App, the data shows that average return readership is 80 percent, video usage increases five- to tenfold and total mobile page views could grow by as much as 400 percent.

iPhone App extends mobile by nearly 400%
Adding an iPhone application is not the same as creating a mobile web site or even an iPhone-specific template. To truly capture iPhone users, content publishers must create applications and list them in Apple's App Store, which is marketed on 30 million iPhone and iPod Touch devices as well as through the ubiquitous iTunes application.

In instances where NOW TV station partners already had a successful mobile web site, the iPhone application lifted mobile page views between 50 percent and 392 percent. In at least one case, the addition of an iPhone application helped increase a single station’s month-over-month mobile page views by 407 percent. In that same month, mobile web traffic grew by about 15 percent.

It is important to note that these mobile sites did not experience drops in mobile traffic due to iPhone users switching to the new platform. Instead, they have seen continued mobile growth while adding new iPhone application traffic. This demonstrates that they are growing their overall mobile reach by focusing on an underserved market.

Return readership
In reviewing applications with more than two months of data, 80 percent of the unique users who download an application return monthly to access content. This shows incredible loyalty and is in direct contrast to other iPhone applications such as games.

According to a February 2009 Pinch Media study, users returning to an application drops precipitously within the first 10 days of downloading an application. Within 90 days, users almost never return to an application no matter if it is free or paid. "Long-term audiences are generally 1% of total downloads," the study states.

This is not the case with NOW iPhone Apps. The average NOW App user launches the application twice per week and accesses multiple pages each time. These news applications are extremely sticky making them fertile ground for advertisers.

Meanwhile an eMarketer study reports that 50 percent of iPhone users who recalled seeing a mobile ad said they responded in some way. In addition, a February 2009 Nielsen industry brief states that the two biggest indicators for iPhone ownership are the "presence of teens and income over $80K." The same study reports the iPhone's household penetration doubled in a year from 3 percent to 6 percent.

More pages and videos consumed
In some cases, NOW iPhone App users read more pages per month than individuals accessing the same content on a station's standard web site. NOW has documented up to a 22 percent increase in monthly page views per unique user over standard web site users.

The top stories and weather content account for 50 percent to 60 percent of all traffic on the applications. Readers make heavy use of the application during severe weather events such as thunderstorms and winter storms. Pages per user jump as much as 159 percent during such news events. At the same time, the number of unique users can increase as much as 133 percent. Together, the increased number of users and their heavy page consumption can result in single-day page view increases of more than 600 percent.

While iPhone users are consuming more news stories, they are also watching more mobile video than other mobile audiences served by NOW products. Video usage on the iPhone App is five to 11 times more than the combined usage of other video products. When compared to individual products, usage can be more than 20 times higher.

This means the average NOW iPhone App user is about eight times more likely to watch mobile video than users with other video-enabled devices. This is likely due to the Wi-Fi capability of the device, improved application usability and increased video quality.

Stations generate revenue through advertising
The NOW iPhone App also helps stations monetize traffic with national and local advertising. NOW traffics banner ads throughout the application. National ads are placed automatically from national network partners, and revenue is shared. Stations are selling local ads into their applications and keeping revenue from those campaigns. The iPhone App makes for a unique sponsorship opportunity. Some stations choose to sell iPhone App ad inventory separately or combine it with their mobile web sales. 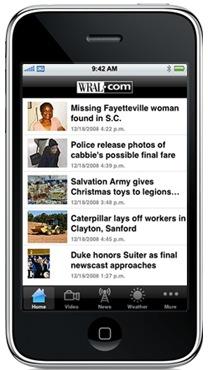