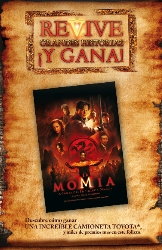 In the summer of 2008, the Universal Pictures México Home Entertainment marketing team wanted to offer an incentive for consumers to purchase the DVD for The Mummy 3, a recent theater blockbuster. The customer experience needed to be seamless, easy to understand and extend the movie brand. In addition, the program must be cost effective and quick to implement for the Universal Pictures consumer marketing group.

Knowing that there are roughly 75 million mobile subscribers in México, which is 69% of the population and three times that of regular Internet users, 2ergo proposed that Universal Pictures implement a mobile instant win game for purchasers of The Mummy 3 DVD, offering a chance to win prizes including cell phones, Xbox 360 Live consoles, DVD players, a 42" plasma TV and a Toyota pickup truck. Upon opening the DVD case after purchase, consumers were prompted to send an SMS with a unique alphanumeric keyword to a specific shortcode to participate in the instant win contest. Randomly selected winners of the large prizes – 58 in total – were chosen based on a custom algorithm developed by 2ergo and were sent a text message with details on how to claim their prizes. Those that didn't win received a different message that offered them a free Mummy 3 branded wallpaper.

2ergo worked closely with Universal Pictures throughout the quick development of the mobile marketing campaign. 2ergo created thousands of unique alphanumeric codes for the printed DVD inserts and turned a licensed Mummy 3 image into mobile wallpapers properly formatted for all phones in the Mexican market. In addition, the 2ergo technology behind the scenes connected to multiple carriers so customers from Telcel, Movistar, and Iusacell/Unefon were all able to participate in the promotion. 2ergo provided Universal Pictures with access to real-time reporting so they could monitor the number of messages received and number of wallpapers downloaded per day. 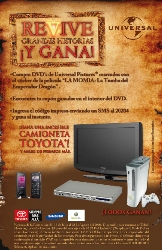 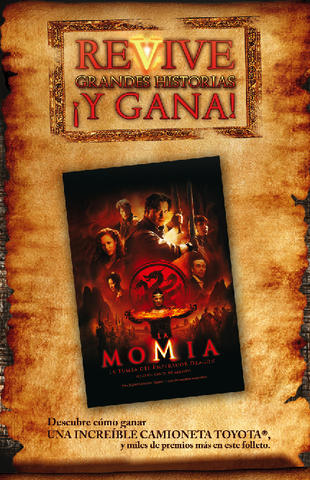 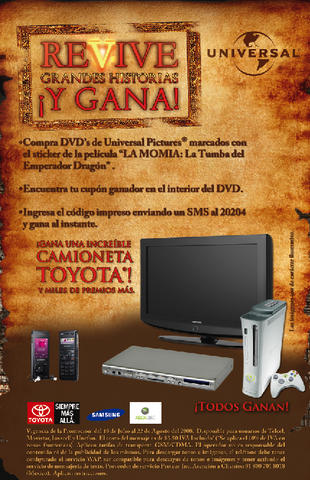