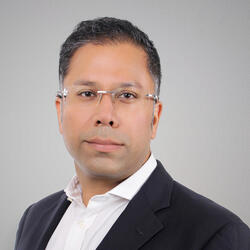 As Group CMO, Manav looks after both Eros Now and the studio business. He is responsible for brand, consumer growth & retention, talent, trade and PR across both these businesses. In his earlier role he was founder CMO for ALTBalaji, India’s first SVOD OTT platform which broke the notion that Indians don’t pay for content.

In his last role at Getit he launched multiple businesses and brands in India and Malaysia across Yellow pages, Horizontal Marketplace and verticals like grocery and furniture, mobile wallet and a merchant lending platform.

At Reliance Big Entertainment, he was the founder of then India’s largest online local search platform that got investment interests from Navteq & acquisition interest from Justdial. He was also part of founding co worked on launching businesses across FM Radio, Music, Motion Pictures, Movie rental & download, online gaming & a JV with Dreamworks Animation SKG.

In his earlier stints, Manav exited a start-up in stealth mode that created an IP that helped telecom towers reduce their energy costs.

He has formal education in Management and Law.